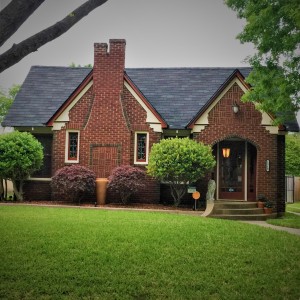 Among Hampton Hills’ most notable residents was Laster Baskem Bruton, who came to Dallas in the late 1920s to establish the Southwest Division of the Hygienics Products Company. In 1928, he and his wife, Sarah Estella Stratton Bruton, met with Alf W. Sanders to finalize the deal on a newly constructed Tudor-style cottage at 1510 Hollywood Ave. On Oct. 6 of that year, the Brutons adopted their first and only child, Mary Elizabeth.

Laster went on to become a respected Dallas businessman. He was a Mason and a Methodist. His wife regularly hosted church socials at their home. But beneath the respectable façade, something wasn’t right. Sometime around 1940, the Brutons’ carefully crafted image began to unravel.

After they divorced, Laster married Aeron Burnet in Matamoros, Tamaulipas, in 1942—the same day Aeron Burnet divorced her husband, Owen Arthur Burnet, whom she had married in 1936. Burnet had recently enlisted in the Navy and agreed that the two should divorce. Bruton had been calling his new bride for dates as early as 1938. Laster and Aeron eventually divorced, on Oct. 29, 1945, and she remarried Owen a short time later.

On Feb. 22, 1946, Owen walked into Laster’s office on the seventh floor of the Texas Bank Building, asking Helen Pryor, Laster’s secretary, “Where’s Laster B.?” When she walked to the door of Laster’s office to announce the visitor, Owen stepped up behind her and began firing a .32-caliber automatic pistol at Laster over Helen’s shoulder. Laster died of multiple gunshot wounds to the head, neck and hips.

The murder trial was a sensation. Among those who took the stand were Aeron, Owen, and Laster’s brother. Owen’s legal team presented a “temporary insanity” defense. They said Laster had a history of domestic violence, including one incident when he became enraged during an argument and shot at Aeron with a .22-caliber pistol. Laster missed, but Aeron fainted and he kicked her, she said. A week prior to Laster’s killing, Laster drove alongside the Aeron’s car on Eighth Street in Oak Cliff, opened the door and said, “I’ll get you yet,” before driving away. The following day, District Judge W.L. Thornton granted an order restraining Laster from “molesting or harassing” his ex-wife. On the day of Laster’s killing, Laster swerved his car in front of his ex-wife’s, forcing it onto the curb between the Triple Underpass and Industrial Boulevard. Then, she testified, he slapped her and cursed her.

Owen, who was employed as a mechanic at the Singer Sewing Machine Company on Elm Street, took a call from his wife, who, he testified, “sounded hysterical.” After the conversation, Owen left the building looking “pale and determined, but dazed,” according to his co-workers. Laster was gunned down a few minutes later in his office, which was six blocks away.

Owen was found guilty of “murder without malice” and sentenced to five years in prison. The sentence, however, was overturned on appeal. The appeals court said the trial judge should have admitted testimony about Owen’s acts and appearance shortly before he killed Laster.

Today, 1510 Hollywood Avenue is the home of Cliff and Jon Garinn. They named it Hampshire, after the county in southern England that is a popular destination for people on holiday. They even adapted Hampshire’s coat of arms as their own, giving its heraldry unique meaning.

On either side of the shield stand the supporters: The lion, representing Jon, symbolizes deathless courage, emphasized by the crossed swords hanging from the lion’s collar. The swords indicate the bearer to a just and generous pursuit of honor and virtue. The stag, representing Cliff, symbolizes peace and harmony. The naval coronet and anchor around the stag’s neck signify Cliff’s association with the sea, succor in extremity and the Christian symbol of hope. The supporters are depicted in gold, representing generosity, while their accessories are depicted in azure, representing loyalty and truth. Accents are depicted in red, representing fortitude and magnanimity. The crest above the helmet consists of a crown and a twin towered castle. The crown denotes a link with Cliff and Jon’s European ancestors. The castle, reflecting Hampshire’s twin front gables, represents grandeur and solidity. The arms stand on a field of roses, representing Hampshire’s serene landscape.